It’s going to be a bit of a test because with the new cats I don’t know how the seedlings will fare.  Hopefully better than they did with the Much Missed Lily – who killed a lot of plants before I figured out how to get around her.

It’s probably a slight bit early to start.  But…  I want to have tomatoes as soon as possible.

My friend at work shared her tomato seeds with me.  They are MoneyMaker tomatoes.  We are  hoping for bigger tomatoes than Box Car Willie, who was such a disappointment last year. All his tomatoes were just barely bigger than cherry sized.  But he did produce until freeze, so that was encouraging as far as confirming the location the tomato is on the balcony.

Well.  They are what I have.  I guess I could poke a couple in some dirt and ponder more.  Its such a commitment without knowledge of end results.  It makes me crazy.

I’m considering replacing all the flower pots with edibles.  It’s won’t be pretty and this is very much a problem in my brain.  I’ll have to think on it.  It would be nice to have a salad garden though.

This is how the balcony looked last summer.  The big pot in the corner is the tomato.  I had hoped to have peppers and zucchini last year, but Lily defeated me.  This year I could make all the flower pots be salad greens.  And cement planter could have french carrots.  And the big pot on the ground could have peppers or a zucchini.

The balcony faces south, HOWEVER, the building blocks morning light because it sticks out farther than the balcony.  So it basically only gets afternoon sun.  And most of that is only on the edges because of the roof combined with the brick balcony.   So if something requires full sun – it has to sit where those blue flower pots are.   Even then, there is a difference in light; as you get closer to the tomato, you get more sun.

I think I’m going to try it anyway.  It might inspire me to eat better.  🙂  But today I’m mostly just worried about tomatoes.

EDITED TO ADD:  We now have answers on how the new cats will treat the plants.  I was tentatively hopeful because they seemed to be ignoring the succulent I put on the window sill 3 weeks ago.  But a few minutes ago I had to clean up this.  That cat in the foreground is looking super smug.  Just saying. 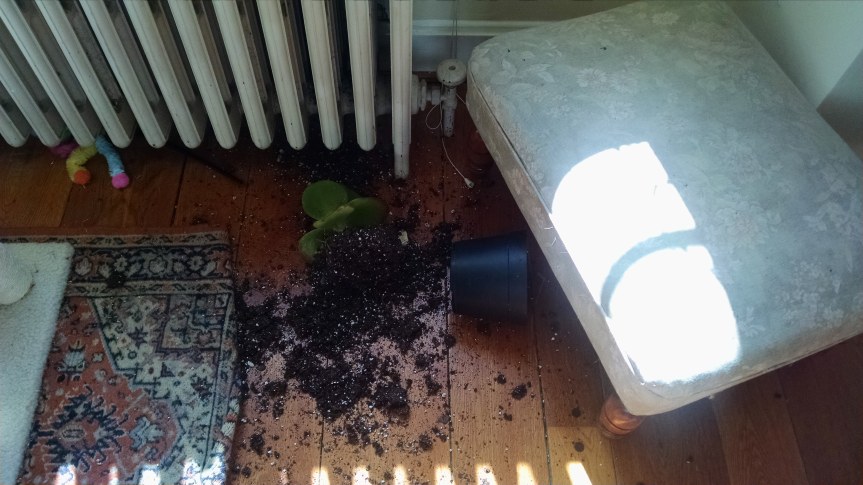