I keep seeing stories and realizing that no one seems to be noticing that the US is rolling backwards.

Can I define this for you?

Our infrastructure – roads, airports, communications lines – now 11th in the world and falling.

Our education system – we’re NOT in the top 10.  We are thirteenth and falling.  Russia beats us.  Michigan is now arguing that it has no responsibility to teach children to be literate.  So I think we can safely say that we are falling in those ranks too.

Our water – we are NOT in the top 10 of clean water.  We have become increasingly aware that we can’t trust the water coming out of our taps.  Because the EPA has suggestions for water testing – but no regulations and no enforcement.  So – your municipality is at the mercy of both greed, indifference and incompetence.  So you have NO idea if the water you drink is clean.

Let me be clear – these are the FUNDAMENTAL REASONS FOR GOVERNMENT.

And our government sucks at it.  And we are letting them suck at it.

Trump intends to drop the secretary of education, which wasn’t a particularly powerful office but at least kept the focus up.

Trump intends to further defang the EPA which is already not doing what I consider a fundamental requirement – enforcing clean water regulation.

Trump does talk about spending money on infrastructure.  Whether he can convince the GOP that this is a worthy plan…  And his plans often ring of making the trains run on time… But it nevertheless is a position that he holds.

This country will go no where but down without these things.  These items are foundation of the country.  But we treat them like political footballs.  It’s going to be our downfall.

It’s finally cold here in Cincitucky.  And I’ve been forced to wear my coat.

This is because I haven’t been hardened off to the cold yet.

But today I was blaming the coat that has successfully taken me through many winters.

So I was staring at coats online.

But it is amazing how looking at them can make me feel like I do.

I guess that is why the economy works.  Because we all buy things because it feels like we need them.  But of course most of it we don’t.

Why do we want unnecessary things at all?

Do other animals do this?

Or is this just a byproduct of our fucked up human brains?

And indeed – some of the best things humans have ever done are the art and stories and music we create.  Utterly unnecessary – and yet so very human and wonderful.

So this is not some scolding diatribe against consumerism and trivial desires.

I get that it’s all an interconnected weave of human existence.  It’s just not always a very practical thing in my life.

I suppose if I wasn’t in a money bind with moving, I’d have bought a coat tonight.  Because I was cold in the grocery story parking lot.  And the only reason I was cold was because I haven’t been hardened to the cold yet.

In a couple of weeks I won’t even notice the sort of weather we had today. And I will still have my old coat.  And I will get a weird sort of satisfaction in knowing that I didn’t buy the damn coat today.  The human brain is weird. 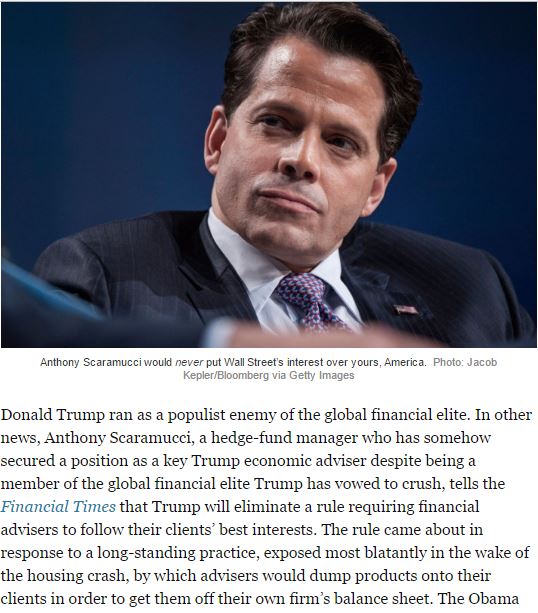 You can read that article here.

I worked for more than 10 years in the Financial Industry.  And what is ABSOLUTELY true is that the people who sell equities do NOT fully understand them.

They are hired because they are good at selling them.  That is the key skill they need.

The ONLY thing keeping them in check – and it’s the barest check – is regulation.

Do you know why the economy crashed last time?  Because we hadn’t regulated the particular fuckery of mortgages.  And they TANKED the world economy selling crap.

Regulation in the Financial Industry is a huge pain the in the ass, but it is an ABSOLUTELY NECESSARY PAIN IN THE ASS.  Almost every reg can be traced to some sort of fuckery.

Call or write to your rep.  THis is NOT something you should ignore.  Really.

You can find your local rep here,

Once you have the name, google it and you can find the reps website which will have a phone number and address for the local office.  This is the most impactful way to connect with them.

This feels less emotionally important than racism and sexism and immigration.  But in reality this is going to be a NIGHTMARE for everyone.

EVERY PERSON in this country, regardless of race, religion, or economic status will be impacted by the bad choices of financial advisors because those collected choices snowball.  They can and literally have shifted the world economy into the toilet. People lose their retirement funds, their jobs and their homes.

DO NOT IGNORE THIS.

What your vote says, at BEST, is that you you don’t think it’s important that the leader of this country represent ALL OF THE PEOPLE OF THIS COUNTRY.

At worst, your vote is a straight up endorsement of treating fellow humans as garbage.

And quite frankly, if you voted for a racist – you get the same mark.  You may spend your life saying that you are friends with people of color or that to you, women are more than just sexual objects for men; but you just acted against them; you acted to hurt them.  I’m not sure you fully recognize that.

Your vote is NOT a passive act.  And if you voted for a racist and a sexist, that vote casts the shadow of racism on you.

Yeah.  I won’t back off on that.  There’s not going to be a free pass.  You got your president, but you don’t get to feel like you did it without getting the mark of racism all over your soul.  Because I will point at it.

You made a choice – a choice with the full and disclosed knowledge that he is a racist and sexist.  It reflects back on you.

And what I find worst about that act, that passive racism, is that you did it for a candidate who is wholly unqualified for the job.  No experience, bad impulse control, no self discipline and a bully.  If you were hiring someone for a job you wouldn’t take someone with those traits, but you put him the white house KNOWING he was a racist.

So I will ALWAYS point it out.  Get used to it.  I will not normalize your supportive racism by agreeing to not see it.  By giving you a free pass, so we can all get along.  NO.  I see it.

When you vote – you are voting for a human being to act in the name of this country. You cannot divorce that person’s views and character from your vote.

You don’t get to say that you aren’t OK with dog killing, that you merely voted for the dog killer because it’s just a vote for your Party.  The best you can say is that killing dogs isn’t that important to you.  And that also says something about you.

Your vote is an act of your belief. It’s representative of you.  No one else can do it for you.  It’s You.  So if you vote – you do take on the reflective pattern of the person you are voting for.  You do take on some of the responsibility.

It is true that you will never find a candidate that meets all the criteria of your ideal.  Which is why is important to know who and what is important to you.  To look at how those things that are important are being represented by your candidate.

To pretend that you believe one thing and vote for something else  is disingenuous. Pretending doesn’t change the fact that if you knowingly vote for a dog killer, you are endorsing killing dogs.  You can’t pretend that you aren’t because it feels bad.

It’s naive to think that people who care about dogs shouldn’t  find your position on dog killing to be awful.  Even if you don’t really care about dog killing, your voting for a dog killer and they love dogs.  They aren’t going to like you for that.

You can be idealistic or you can be pragmatic.  In my experience, pragmatic people get food on the table and are generally more generous of effort and time for other people than idealists.

Idealist love their ideals because it feels good to be idealistic.  To them the moral high ground is far more worthy than the practical value of doing what is necessary to assure people get the things they need.

Ideals are moral absolution for acting badly or worse, not acting at all.  I prefer it when people just do some good.  Take steps however slow toward getting things done.

I have no patience for high moral rectitude.  It’s rarely all that helpful to anyone but the people who hold it.  Certainly it’s not helpful in politics. I prefer people who work to make things better.  Not people who talk about what they want and then refuse to take even a step in the right direction because if they can’t reach their particular destination, it’s not worthy.

Idealist lead to extremist.  They lead to feeling righteous about taking revenge, about acting destructively, about doing nothing when something would lead to a small improvement.  Extremists are often cruel and self centered.

I was an idealist when I was young.  It is easy to embrace the purity of idealism. It feels so right and good.  But experience in the world has shown me several things –  The Ideal is never real.  It has never been achieved.  It’s purity is misleading.

The Ideal should be nothing more than a pin on a wall to give us a destination.  It should only be a pin because sometimes even the destination needs to be adjusted with circumstances.  But what is more valuable – infinitely  more valuable – is the practical daily action taken to make things better.

To look around at this moment and its present chaos and say – what can I do today that will help, even in a small way, make this day, this moment better.

We don’t live in the ideal, we live here in this moment.  What you do now, however small the act, is the entire point of living.