Last night I sent a message to a person who is taking care of her boyfriend in the hospital.  She was exhausted and feeling defeated and I sent her a tweet of sympathy and what I hoped was validation for their most recent and shitty choice.   In it I put the “shit” emoji. On my emoji keyboard it’s just a pile of poo, no face.

After it posted on twitter it had a face that looks like surprised, possibly smiling pile of poo.

It changes the entire emotional impact of the thing. To say the least.

A new language is evolving.  A language of emoji.  But rather than everyone the world over having the same picture, we have let every goddamn company design their own emoji picture – and so now we can’t speak to each other in what could POTENTIALLY be a universal language.

Because you can’t trust that they are going to get message you sent.

Unicode specifies “pile of poo” for these ASCII characters but every platform can interpret the pile of poo differently.  Adding a face to a pile of poo vs a wave of smell means those two pictures have 2 different connotations.

Take the grinning smile for example:  Look below and tell me that which of those grins look like the grimace of someone on a toilet with constipation? 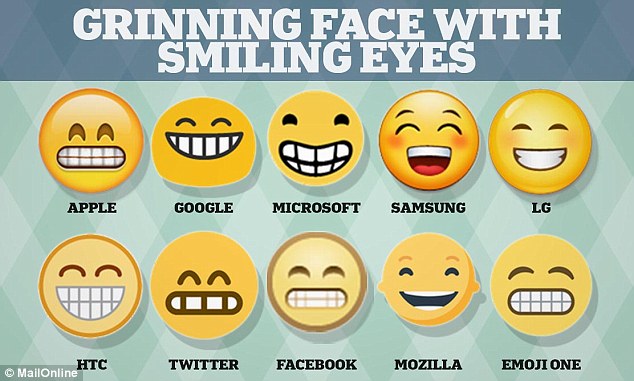 You know I’m right.  Apple, Facebook, Emojione and Twitter’s Graphic Artists need more fiber in their diet. I’m not going to send that and expect that someone is thinking I’m thrilled with something.  I’m going to be afraid they will think I’m begging for fiber.

Samsung and LG nailed it.  But don’t use it on your LG phone just because it looks great on it.  You friend with the apple is going to be wondering if you are in pain.

I don’t understand how this opportunity for creating a world language could have been so horribly missed.  WHY in a world that constantly feels the language barrier problem could the idiots with power at Unicode not hire someone to make each emoji, and then handed those out with the code?  WHY? They could have saved countless horrible and embarrassing moments.

8 thoughts on “Can we discuss… Emoji?”