It’s part of the American Tradition for them to poked and satirized on these shows.  They have, for the most part, been good natured and mature about it in public.  I am sure it smarts in private.  But if you are the President you are, or should be, mature enough and strong enough emotionally and intellectually to take the high road and ignore it at worst, smile at best.

But Donald Trump is not mature.  He is the emotional equivalent of a 13 year old.  And so he is openly showing how much he smarts from pokes. 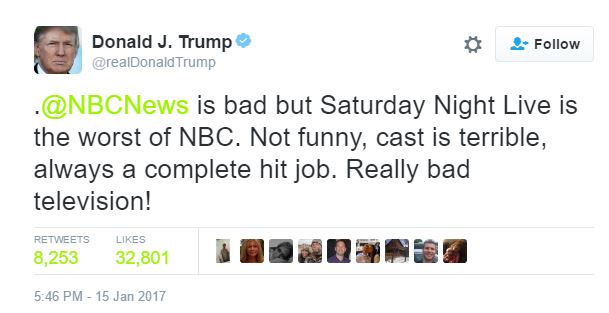 Everyday we seem him lash out in someway because someone did something that hurt his feelings.  Every weekend we see him complain about SNL.  It’s embarrassing that he’s so pathetically thin skinned.  He exudes that terrible awkwardness that comes when someone is utterly unaware that they are showing their weakness to everyone and becoming weaker in the process.

There is a twitter feed called @MatureTrumpTwts   They re-write his tweets as though a proper president had written them.  It is so utterly depressing to see the stark difference between what we have always expected from out leaders and what we are being served by Trump.  We have essentially elected a man with a tween mentality.

It’s terrifying.  His skin is so thin that the absolutely reliable tradition of being made fun of by comedians is bothering him.  How is he going to manage it when the stakes are big, the pokes are unexpected and loss is public. He will be controlling largest military force the world as ever seen.  He will decide whether or not to use nuclear weapons.  And he is as thin skinned as a pimple covered 7th grader.

Our only hope is that he is removed from office sooner rather than later.  I don’t doubt that Pence will still enact legislation that will enrage me because I’m a liberal and he’s a conservative. That is the nature of politics.  But I doubt I will ever be afraid that Pence would go to war because of some drama llama moment.  Pence may have a different vision for the country than I do but he would always act for the country not for himself.  And it turns out that is a HUGE factor that we have always had as our default setting to date.  But not anymore.

12 thoughts on “Every President in My Lifetime has been butt of Late Night Comedians.”