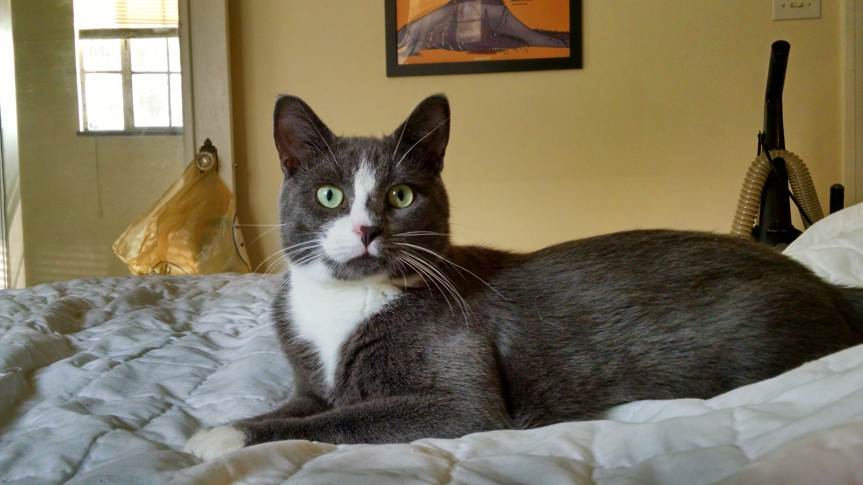 Above us is the Rebel, Tim.  He is usually referred to as The Kitten.  But I think he’s all grown up now.  He’s not a big cat though, so I will probably always call him The Kitten.

He’s excellent at distracting me from my chores and just generally being in the way.  In other words, he cats very well.

One of his peculiarities is that he insists on drinking his water just when he knows I will be picking it up to change it.  I’m not sure why.  It’s not because he prefers the old water because he will also immediately drink the fresh.  I’m pretty sure it’s because he knows I will stop and wait for him.  And any action that causes me to change direction or pause is  GOOD CAT POLICY.

Recently I’ve taken to putting a giant ice cube in the water bowl.  I don’t actually have an ice cube tray.  I freeze water in solo cups.  I keep two standard size cups frozen and one small dixie cup frozen.  I put the dixie one in the cat’s water.  It bobs around and makes for an excellent distracting toy and he likes to lick it.  Bijou shows zero interest.  She’s above such things.  Royalty does not deem to notice icebergs in water bowls.

Seeing that he is interested in water generally, I decided a water fountain would probably work well.  So I bought one.  Naturally, since I’ve invested money he just stares, doesn’t drink.  At least so far.  I really need for it to work because I’m supposed to take a small trip and this water fountain will make me feel less worried about the water situation with the cats.  It has a large reservoir and a filter.  So I think it will keep fresh water for up to 4 days.  And hopefully I won’t be gone more than 3.

The more you rely on cat’s reacting a certain way, the less they are reliable.  sigh.

7 thoughts on “Watering the Beasts”